In the year since one of the most divisive elections in US history, more than 6.9 million Americans got their news straight from the source by tuning into live press conferences, hearings, and briefings on Livestream.

When the information landscape is crowded with niche news sources, “fake news,” and Russian propaganda, this unfiltered access to primary political content is helping to bridge divides while American politics are at their most contentious. Livestream wanted to look at our own political streaming data to see what we could learn about our audience and their political views.

With an estimated 22.2m Americans slated to cancel their TV service in 2017, according to eMarketer, cordcutting is increasingly becoming a national pastime with Americans are increasingly getting their political news and information online. The Pew Research Center reports that as of August 2017, 43% of Americans often get news from online sources – neck-and-neck with the 50% who often get news on television. This gap between traditional broadcast TV news and digital has doubled in size since 2016. The same report notes that 85% of US adults get their news on mobile devices, and this surge is driven by older Americans: “Roughly two-thirds (67%) of those ages 65 and older now get news on a mobile device, a 24%-point jump from 2016 and about three times the share in 2013.”

Analyst Peter Moore, from digital survey company YouGov, found in 2016 that: 27% of America is “actively trying to avoid the news.” YouGov also reports that distrust in traditional media is on the rise, finding in a 2017 study that “Most Americans (70%) agree that news organizations report stories in a light that’s partial to who owns them.”

As Livestream is a platform – not a media company in the traditional sense – there is no political viewpoint offered. This level playing field eliminates the potential for slanting coverage through cherry-picking contributors or seconds of coverage presented without context. This neutrality and whole presentation of political streams offer viewers an unobscured look at notable political moments.

What Livestream Audiences Are Saying About Politics

We set out to study how our audiences discuss political streams and share their opinions. In 2016, coverage of the US presidential election and associated events – such as debates, rallies, press conferences – ranked as some of the most popular content on Livestream. A contributing factor to the popularity of these streams in Livestream’s unique live chat feature. Unlike the myriad internet comment sections found on traditional broadcast news sites, our audience can comment, chat, and debate in real time.

A year out from election day 2016, we analyzed the sentiment of the 5,355 comments on 241 politically-focused streams from November 2016 to November 2017, as seen by 6,959,622 viewers. We also looked at how this sentiment and viewership changed over time.

First we digitally analyzed the comments to rank the most-used words and visualized our results below – the more often a word was used, the larger it appears. 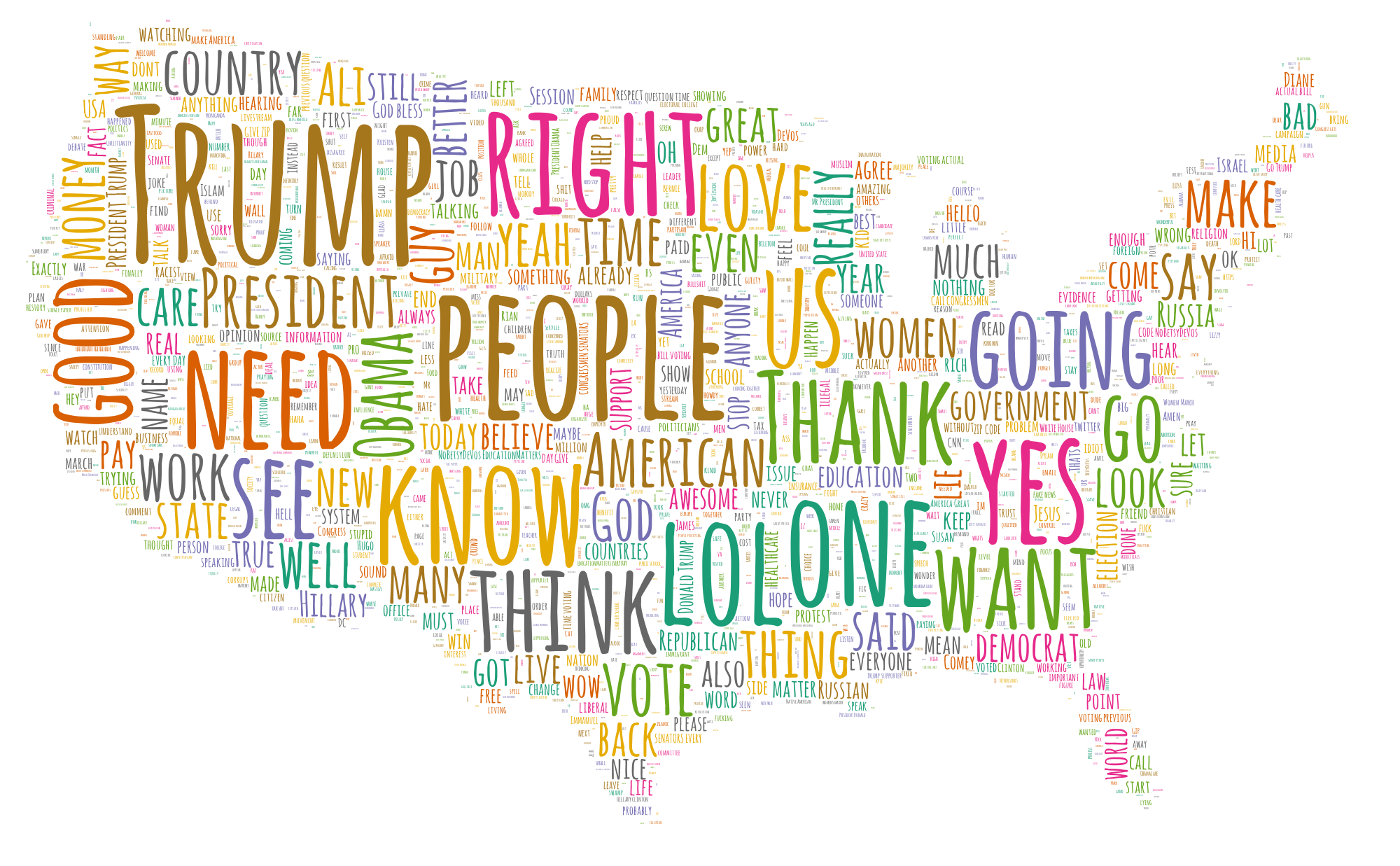 Then we looked at negative or positive comments over time. Computational tools were used to determine the emotional tone behind words, and to gain an understanding of the attitudes, opinions, and emotions of the people commenting. Illustrated in the graphic below, positive and negative comments overall spiked around the election, spiked massively around the inauguration, and then spiked negatively in June 2017 when Attorney General Jeff Sessions and former FBI Director James Comey testified about Russian involvement in the election alongside other intelligence officials.

What political streams received the most viewership? We can only track what was streamed on our platform but the most viewed streams of President Trump’s first year in office include Secretary Clinton’s post-election address, the Inauguration, and former FBI Director Comey’s testimony in June.