[Case Study] How to Choose a Live Streaming Platform: Tips from the Pro Football Hall of Fame

The Pro Football Hall of Fame was built to pay tribute to some of game’s most outstanding athletes, coaches and contributors. Since then, a total of 310 retired players and coaches have been elected into the Hall by media representatives for their contributions to the game. To engage its fan base, the Hall hosts events throughout the year and most recently, has begun to broadcast other events such as the Hall of Famer, Hometown Hall of Famer, and Enshrinees’ Gold Jacket Dinner, featuring members of the Hall. So when it came to the decision of how to choose a live streaming platform, the Hall needed something that was not just reliable, but one that would take its production to the next level. The U.S. Army Pro Football Hall of Fame Award for Excellence, which seeks to recognize 25 of the country’s top high school athletes, is just one of several events hosted and broadcasted live by the Hall. In 2017, the event was streamed via the Vimeo Livestream platform to the Pro Football Hall of Fame’s website, Facebook page, and its account page, reaching over 3,600 viewers.

George Veras had the initial vision to stream events at the Hall of Fame, and he considers the first livestream of the luncheon to be a resounding success. The 13-time Emmy-winning producer has produced hundreds of documentaries, television shows, musical and sporting events throughout his career.

“We are very pleased with the technical platform and support system that has made it very easy to use and reliable,” says Veras, chief operating officer and executive producer, who has served at the Hall since 2009.

Veras envisioned an audience that extended far beyond the walls of the Pro Football Hall of Fame, reaching fans across the country, and even globally. A vision now taking shape because of Livestream. “We’ve been doing a lot more live video this year, increasing the number of our multi-camera productions, and finding opportunities to make live video when we can, and just getting it out there,” says Veras. He attributes the Hall’s ability to do so to the reliability of the Livestream platform.

“Livestream gives us that with its fast support response, reliability and ease of use. In picking a livestreaming platform, we were hypersensitive to having that tri-factor,” says Veras.

How To Choose a Live Streaming Platform

Chad Reese, Director of Information Technology and a 23-year veteran at the Hall, was assigned the task of finding a livestreaming platform by Veras.

“George came to me and was looking for a way to get our content live on air – one that was easy enough for a regular user to figure out,” says Reese. The organization had tried other products in the past and all missed the mark:: “User experience wasn’t friendly; they were hard to use, weren’t reliable, or just didn’t work when we needed them to. We’d be in the middle of a broadcast – maybe a two-hour broadcast – and all of a sudden the video would start freezing up and become jittery.”

Livestream first arrived on his radar in his conversations with an analyst from research firm Gartner. “We just kept coming back to Livestream when I was talking about my needs, and what I was looking for,” says Reese.

#1 Reliability: Reese wanted his stream to simply work when he needed it to. “The hidden cost of reliability is huge – and it’s there with every other product. Everyone claims a huge uptime and reliability, but in the end, Livestream is the only product that has delivered for us,” he says.

“I’m not losing sleep at night worrying about whether or not my live stream is going to work tomorrow. That is very comforting from an IT standpoint,” he says.

#2 Usability: One of the things that stood out for Reese was Livestream’s ease of use and robustness: “That was where Livestream really shined for us. It was pretty much the game changer. I can hand over the platform to anyone and they can figure out how to use it without even being trained. It’s that easy.” Reese does not have the benefit of a dedicated staff to help manage live streaming at the Hall, making the platform’s ease of use especially valuable. The organization often partners with local high schools to help manage its live streams.

“High school students who’ve never had any experience are coming in and helping us live stream in real time,” says Reese. “We’ve had 18-year-olds do this and the events looked like they were produced by people who’ve been doing AV work for 20 years.”

#3 Privacy Controls: For the Hall’s Enshrinees’ Gold Jacket Dinner event, Reese’s team had the ability to password protect its live stream and limit viewership to just members with password and user credentials. “We’re in a room full of VIPs who paid a good amount of money for the opportunity to watch the event in person, as well as live and on-demand. That proved to be very popular,” says Reese, adding that future live streamed events could even serve as a revenue generator for the organization.

#4 Streaming to Multiple Destinations: Perhaps most impactful of all is Livestream’s Simulcast feature which enables the Hall to live stream to multiple destinations such as its website, Facebook, and Livestream.com. “This is so powerful because not only can we live stream on our website, we also get to live stream on Facebook, plus we now have a history and record of both. We don’t need to run two separate feeds – it is a one-stop shop,” says Reese.

Since the Hall began streaming to Livestream and Facebook, it has seen significant growth in viewership and an increase in traffic of between 5,000 to 10,000 monthly visitors on its website.

#5 Hardware Flexibility: Reese ran into numerous issues in dealing with other live streaming providers. “A lot of them said that we’ll have to buy their encoders, among other things. With Livestream, I have the flexibility of using third party tools or equipment,” says Reese. “It can be a lot more bang for your buck, because not everything is proprietary. We have a tight budget and if I can save hundreds of dollars, it really adds up in the long run.”

#6 Customer Service: In the live video industry where timing is paramount, excellent customer service is imperative to pulling off a successful live stream. “Every time I’ve called [Livestream], the people I’ve spoken to know exactly what they’re talking about. That’s huge. With a live event, we don’t have a ton of time to be transferred from person to person. Livestream always has someone who can answer my questions right away,” says Reese.

#7 Budgeting for Live: When it comes to picking a live streaming solution, the total cost of ownership and amount of labor must be taken into consideration, advises Reese. “Everybody promises they can do better and cheaper. But then you’re then told to buy this and that, and the total cost of ownership just shoots through the roof,” he says. “With Livestream, I’ve not run into a single ‘gotcha’ which is incredible. I’ve never ran into a product that didn’t have a ‘gotcha’ or a hidden cost.” 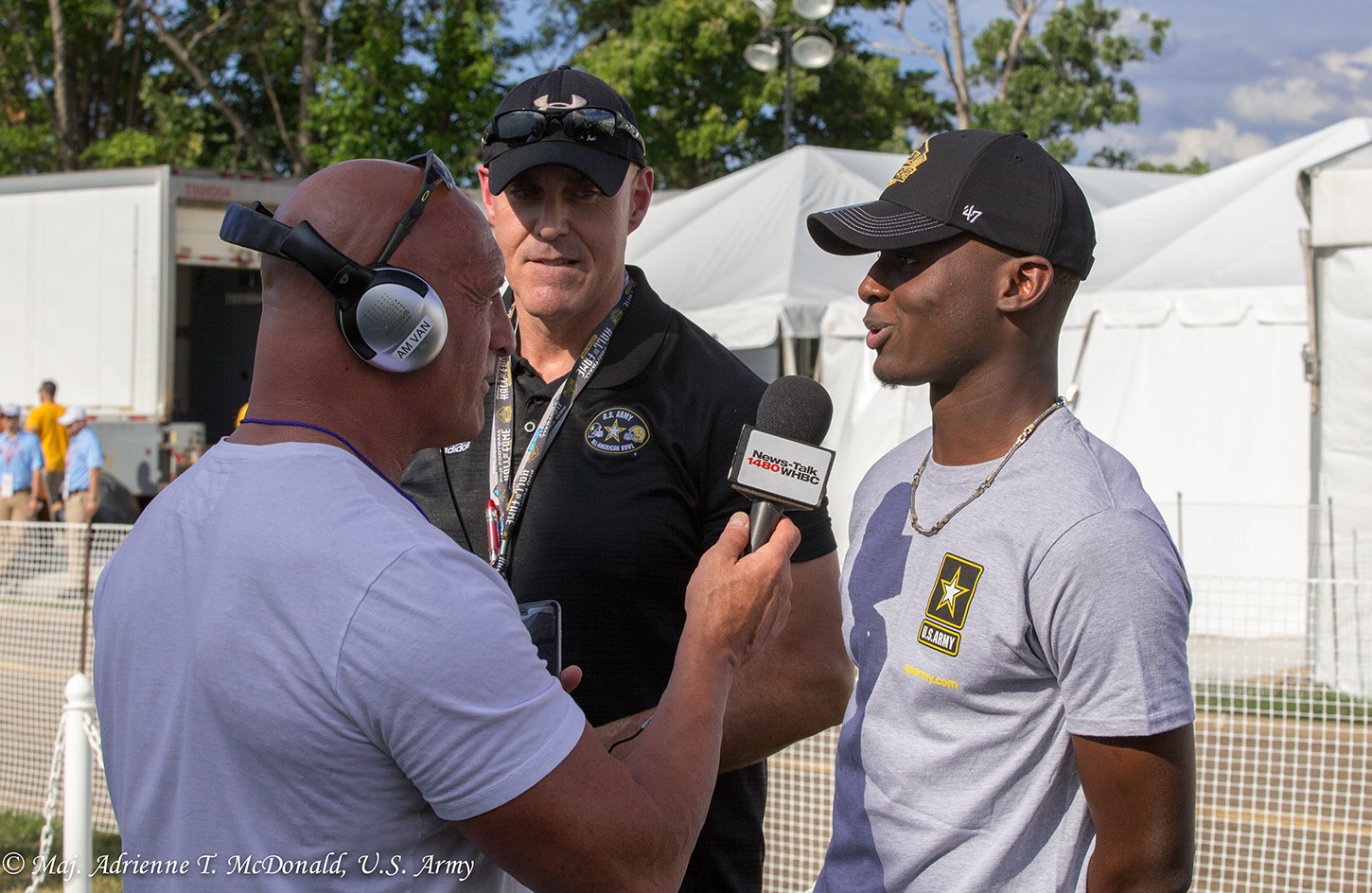 Essentials for a Successful Livestream

There are two foundational elements required to implement a successful live stream, according to Reese.

Sufficient Internet Bandwidth: Livestreaming video can require significant bandwidth. As the video industry moves toward 4K and beyond, bandwidth requirements for streaming will increase correspondingly. “Livestream is able to auto adjust bandwidth and change our stream, according to what works best,” says Reese. “If you’ve got a good bandwidth you can really pull off some spectacular things.” For example, at the U.S. Army Award of Excellence, Reese was able to execute various multi-camera shots which he wasn’t previously able to do. “People saw that and thought we had spent a fortune on production,” says Reese. “Little did they know that it was just a couple of cameras and some guys making it happen. There was very little cost involved. That’s a lot of bang for your buck.”

For Reese, the broadcast-quality stream provides a tremendous return on investment, especially for its sponsors: “Our sponsors are looking for quality professional presentations. When they see our production, they are just knocked off their seats. They think we’ve spent tens of thousands of dollars on production but we’ve spent almost no money – it’s that powerful!”

A Strong Computer with a Powerful Graphics Card: To avoid hesitation and lags in your live stream, Reese recommends using a computer with significant processing power and a dedicated graphics card. The Hall uses the HP Zbook 15 G3 which Reese felt was “strong and beefy enough to handle the stream.”

Content is key in paving the way for the next big revenue stream, says Veras, and he believes the Hall’s legacy provides a “tremendous opportunity.” The Hall’s rich past means Veras and his team are sitting on a treasure trove of football history, “from millions of photos to hundreds of hours of audio and video recordings.”

In the coming year, Veras has his eye set on live streaming the Hall’s weekly radio show to multiple destinations such as Facebook to expand its reach. “We’ve been talking a lot with Livestream about producing live video content from our Sirius XM radio show. Having that visibility across different platforms will be great,” says Veras. As he puts it: “It’ll be like having our very own TV show.”

Livestream has a variety of solutions that can work for every budget and workflow. To find out how to get started, check out our  “Ultimate Guide to Livestreaming Events.”